“What If” you could somehow magically teleport (aka dev hack) a plain, base, un-upgraded ship to wave 99, how would it do?

Not so well. But that’s really no surprise, wave 99 should be difficult even with an upgraded ship..

The difficulty curves aren’t tuned out this far, this is really just an experiment. Difficulty is “mostly” tuned out to wave 60, then essentially of runs linearly from there. That ought to be enough to challenge even hard-core players (don’t expect a casual player to make it much beyond about wave 10 or so).

Came up with a simple solution to the enemy health huds – rather than just keep adding more and more dots (which end up cluttering the screen), the dots just get abbreviated above 10. It’s not perfect, but at least lets you know you’re in for a challenge: 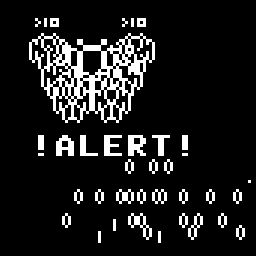 Options screen is now functional and handling varying resolutions – such stuff isn’t very glamorous or exciting to talk about, but it’s gotta get done..